Carved out of a single stone in 8th century Kailasa Temple is a part of Ellora caves. As per certain inscriptions it is believed to have been built by Rashtrakuta Ruler, Krishnaraja I. However different elements of the kailasa temple are believed to have been added over time in different phases. It is the most magnificent and monumental amongst the temples in its vicinity. It is also the largest of all with its very own courtyard.

The hindu temple dedicated to lord shiva is one of the oldest temple in India with exquisite rock carvings throughout the ajanta caves and the ellora caves. Being one of the UNESCO world heritage site it generally attracts a big portion of the foreign tourism share in the Indian subcontinent.

Kailasa temple deity and the shrines:

The main deity in kailasa temple is Kailashanatha. Kailash temple has a number of shrines and like every temple dedicated to Lord Shiva, Kailasha Temple also has a Nandi mandapa. The lingam in the main sanctum is from a later period in comparison to its construction. It is believed to have been added by Rani Ahilyabai Holkar.

It has been noted by many leading historians that the architecture of this temple is very different from the style prevalent in deccan temples in India at that time. It seems to have been influenced by South Indian architecture.

There are five shrines in the temple. They are detached from the main premises and are dedicated to the three rivers goddesses Ganga, Yamuna and Saraswati. 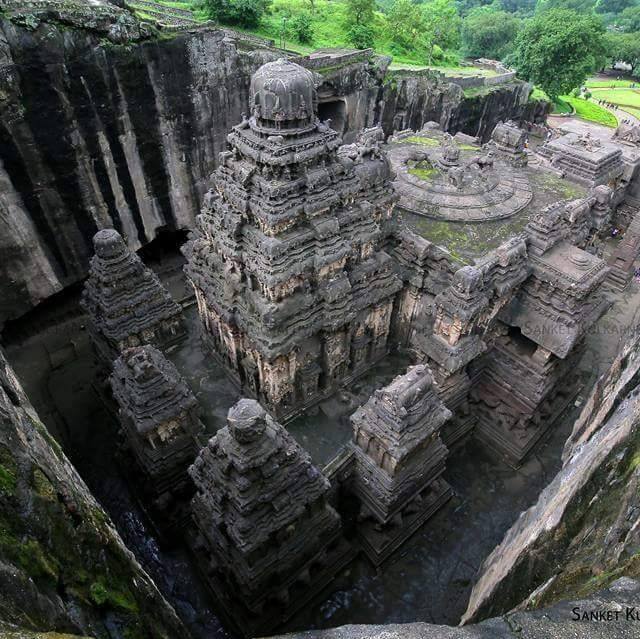 The entrance to the temple premises is through a courtyard which features a low gopuram. Upon entering you’ll find the deities affiliated to both Shaivism and Vaishnavism. The gateway to the U-shaped courtyard is two-storied. The courtyard is surrounded by three stories high columned arcade. They contain enormous sculptures, alcoves and panels of various deities.

Earlier the temple had flying bridges which connected the galleries to central temple structures. But those stone bridges have now fallen with the course of the time.

This temple gathers a lot of attention from the fact that it was built out of a single stone. The carver paid attention to every detail and rigidly followed the traditional methods. One might think the carving of such humongous stone must have started from bottom, but actually the carvers started carving it from above.

Its exquisite build-up is something that captivates and intrigues at the same time.